You might be asking yourself, “How was the 2016 New York R Conference?”

Well, if we had to sum it up in one picture, it would look a lot like this (thank you to Drew Conway for the slide & delivering the battle cry for data science in NYC): 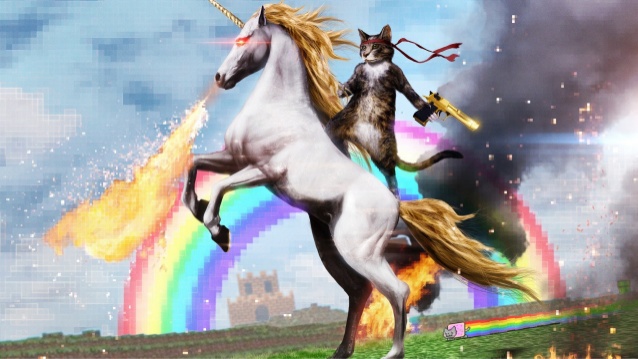 Our 2nd annual, sold-out New York R Conference was back this year on April 8th & 9th at Work-Bench. Co-hosted with our friends at Lander Analytics, this year’s conference was bigger and better than ever, with over 250 attendees, and speakers from Airbnb, AT&T, Columbia University, eBay, Etsy, RStudio, Socure, and Tamr. In case you missed the conference or want to relive the excitement, all of the talks and slides are now live on the R Conference website.

With 30 talks, each 20 minutes long and two forty-minute keynotes, the topics of the presentations were just as diverse as the speakers. Vivian Peng gave an emotional talk on data visualization using non-visual senses and “The Feels.” Bryan Lewis measured the shadows of audience members to demonstrate the pros and cons of projection methods, and Daniel Lee talked about life, love, Stan, and March Madness. But, even with 32 presentations from a diverse selection of speakers, two dominant themes emerged: 1) Community and 2) Writing better code.

Given the amazing caliber of speakers and attendees, community was on everyone’s mind from the start. Drew Conway emoted the past, present, and future of data science in NYC, and spoke to the dangers of tearing down the tent we built. Joe Rickert from Microsoft discussed the R Consortium and how to become involved. Wes McKinney talked about community efforts in improving interoperability between data science languages with the new Feather data frame file format under the Apache Arrow project. Elena Grewal discussed how Airbnb’s data science team made changes to the hiring process to increase the number of female hires, and Andrew Gelman even talked about how your political opinions are shaped by those around you in his talk about Social Penumbras.

Writing better code also proved to be a dominant theme throughout the two day conference. Dan Chen of Lander Analytics talked about implementing tests in R. Similarly, Neal Richardson and Mike Malecki of Crunch.io talked about how they learned to stop munging and love tests, and Ben Lerner discussed how to optimize Python code using profilers and Cython. The perfect intersection of themes came from Bas van Schaik of Semmle who discussed how to use data science to write better code by treating code as data. While everyone had some amazing insights, these were our top five highlights:

JJ Allaire, the second speaker of the conference, got the crowd fired up by announcing new features of RStudio and new packages. Particularly exciting was bookdown for authoring large documents, R Notebooks for interactive Markdown files and shared sessions so multiple people can code together from separate computers.

Andrew Gelman Discusses the Political Impact of the Social Penumbra

As always, Dr. Andrew Gelman wowed the crowd with his breakdown of how political opinions are shaped by those around us. He utilized his trademark visualizations and wit to convey the findings of complex models.

On the morning of the second day of the conference, Vivian Peng gave a heartfelt talk on using data visualization and non-visual senses to drive emotional reaction and shape public opinion on everything from the Syrian civil war to drug resistance statistics.

University of Alberta Professor Ivor Cribben demonstrated his techniques for analyzing fMRI data. His use of network graphs, time series and extremograms brought an academic rigor to the conference.

After a jam-packed 2 full days, Elena Grewal helped wind down the conference with a thoughtful introspection on how Airbnb has grown their data science team from 5 to 70 people, with a focus on increasing diversity and eliminating bias in the hiring process.

See the full conference videos & presentations below, and sign up for updates for the 2017 New York R Conference on www.rstats.nyc. To get your R fix in the meantime, follow @nyhackr, @Work_Bench, and @rstatsnyc on Twitter, and check out the New York Open Programming Statistical Meetup or one of Work-Bench’s upcoming events!

Last night we celebrated Rounded Pi Day by rounding at the 10,000’s digit to get 3.1416 which nicely works with the date 3/14/16.  This was great after Mega Pi Day worked out so perfectly last year.  And this all built upon previous years’ celebrations.

Some pictures from the fantastic night: This year we celebrated Mega Pi Day with the date (3/14/15) covering the first four digits of Pi. And of course, we unveiled the Pi Cake at 9:26 to get the next three digits.  This year the cake came from Empire Cakes and was peanut butter flavored.  We even had the bakery put as many digits as would fit around the cake.

A large group from the NYC Data Mafia came out and Scott Wiener of Scott’s Pizza Tours ensured we had the perfect assortment and quantity of pizza.

A look at Pi Cakes from previous years: Attending this week’s Strata conference it was easy to see quite how prolific the NYC Data Mafia is when it comes to writing.  Some of the found books:

And, of course, my book will be out soon to join them.